According to the latest Overseas Security Advisory Council's (OSAC) Crime and Safety Report, Haiti is unique in the Caribbean for its relative lack of tourism, scarcity of foreign investment, and inferior infrastructure. As a result, reliable crime statistics are typically unreliable and difficult to find. A comparative analysis of figures from various police/security entities operating throughout Haiti reflects a continuation of the trend in which incidents of crimes are inaccurately or under-reported. Haiti’s perennially weak judiciary exacerbates an already unsteady security environment. 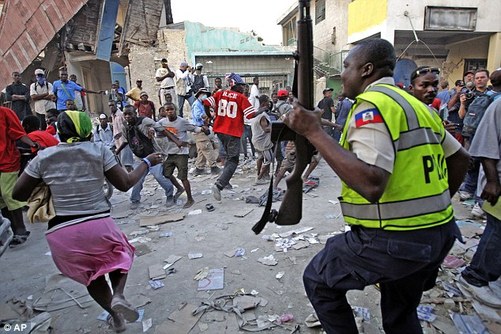 On April 20, 4004, under the recommendation of the Secretary General, the Security Council established the United Nations Stabilization Mission in Haiti (MINUSTAH). According to their website:

MINUSTAH was originally set up to support the Transitional Government in ensuring a secure and stable environment; to assist in monitoring, restructuring and reforming the Haitian National Police; to help with comprehensive and sustainable Disarmament, Demobilization and Reintegration (DDR) programmes; to assist with the restoration and maintenance of the rule of law, public safety and public order in Haiti; to protect United Nations personnel, facilities, installations and equipment and to protect civilians under imminent threat of physical violence; to support the constitutional and political processes; to assist in organizing, monitoring, and carrying out free and fair municipal, parliamentary and presidential elections; to support the Transitional Government as well as Haitian human rights institutions and groups in their efforts to promote and protect human rights; and to monitor and report on the human rights situation in the country.

The stabilization mission did result in a slight reduction in crimes, but the 2010 earthquake had devastating effects on the mission and country as a whole. Port-au-Prince was hit especially hard, and the weak infrastructure in the city collapsed. The UN extended its mission as a result, and was vital in the cleanup and restoration efforts. The Secretary-General also noted that Haiti had made considerable strides since the 12 January 2010 earthquake and that for the first time in its history, there had been a peaceful transition of power from one democratically elected President to another from the opposition.

Even with the efforts of the UN, OSAC still reports that U.S citizens traveling to and residing in Haiti are reminded that greater Port-au-Prince remains a leading venue for criminal kidnappings. Like the kidnapping in the book, "Most kidnappings continue to be criminal in nature, and the kidnappers make no distinctions of nationality, race, gender, or age. All persons are perceived to have wealth or some family connections with assets, either in Haiti or abroad, are vulnerable".

Underreporting of crimes in Haiti remains a problem due to lack of resources, police officers, and faith in them to bring justice. The police force has a very limited presence because "If the police are needed to interrupt a crime in progress or to investigate a concluded criminal act, the victim normally must drive to the local police station and pick up an available police officer." As a result, the inifference and helplessness Mireille experienced in the book is a realistic representation of the current state in Haiti and Port-au-Prince. The gangs are able to do whatever they want in broad daylight because there is no threat of police intervention and the Haitian people know that if they intervene they will most likely be killed on the spot.